This week the designers went to Hard Rock Cafe to meet with Alyssa Milano and Kitsey Phillips, VP, merchandise develpment. We all know Hard Rock and his fashion – I’m assuming you do, here in Europe it’s very famous – and it’s time the contestants have a different inspiration! They were given numbers that corresponded to a certain music genre on the jukebox.

As the title announces, this challenge will be a face off – each pair of designers have the same music genre and must battle for the throne, every pair will have an high and a low score.

This was the most difficult decision for the judges, because both looks were great. I think Ken deserved the win, just because his concept was more unexpected – the sequin, the transparecy, the jacket. She could be performing or going to a red carpet, this outfit would work in any occasion.

So, Anthony went Beyoncé all the way, but it felt a little “normal” for me. Despite the feathers, the net, the friges – it was a regular pop outfit. Well made and pretty, but a normal pop look.

High Score – Winner of the Challenge

I agree with this decision, Edmond’s look is cooler than Stanley’s. It was fun to see how these two tayloring designers came up with some rock clothes for cool chicks. When Olivia asked Edmond if he could take the vest off and he said she was naked underneath, I got a little disappointed, he just had to add a black stripless bra ou a simples black cotton bralette. Anyway, for me Ken or Fabio should have won – I really thought Ken got this one! 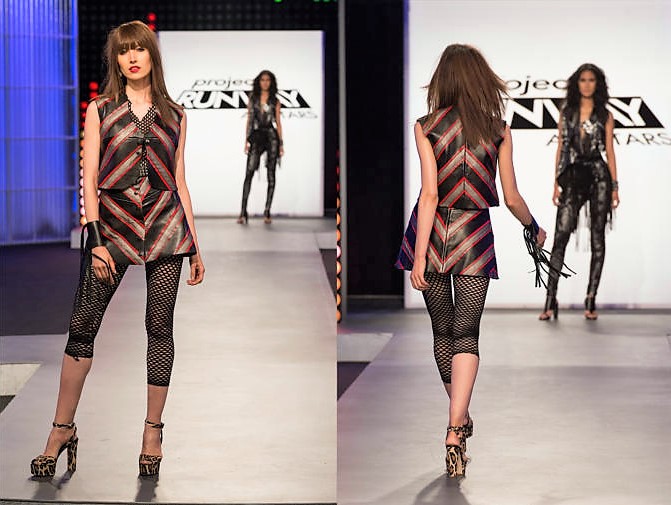 Georgina didn’t liked the matchy-matchy of the outfit, but I think it’s okay – it’s rock’n’roll, there’s no rules! But I agree with Isaac, I wish the colour detail was like a bright yellow or purple, the red is a little expected.

It was obvious for me that Fabio deserved the high score. He just turned the Dolly Parton style into high fashion! Just like Olivia said, I could see any country artist wearing this for a music award event. I think this outfit it classy, cute and confortable – he even thought of that, he made the look in stretched fabric so the artist could perform! Great job again!

Helen would be the winner of this face off if she didn’t choose the sequin fabric. I relate to her idea, like a badass independent country woman, but it would never work out in that sillouette. I really like the shape of the dress, but it looked like a cheap renting costume. Adding the boot made it better, but it wasn’t enough to save it and she was eliminated. She looked surprised she was the one going home and that reveals that she has underestimated her fellow contestants’ work.

Did you agree with the elimination?

Let me know in the comments bellow!