This episode starts with Alyssa Milano presenting the ghest for the next challenge – Betty Boop! As a fashion and movie icon from her era, Betty wants to become an influencer for the new generations – but she needs to update her style. She wants a glamourous and playful design and in return, the designer would made a collection for Betty’s new retail line, to be sold in stores state wide.

The contestants had a 200$ budget and 30 minutes to sketch. After Anne’s mentoring, they received a message from Betty Boop’s friend Popeye! And he tells them to sex it up! All designers decided to make changes into their garments.

The ghest judge this episode was fashion designer Rebecca Minfoff.

Everyone was confused about this outfit. Both Isaac and Georgina don’t see any resemblance of this design to Betty’s style. Rebecca and Alyssa questioned her design process, because Merline says she wants to show sexy curves on the model, but she actually put a bunch of fabric on the waist of the dress. 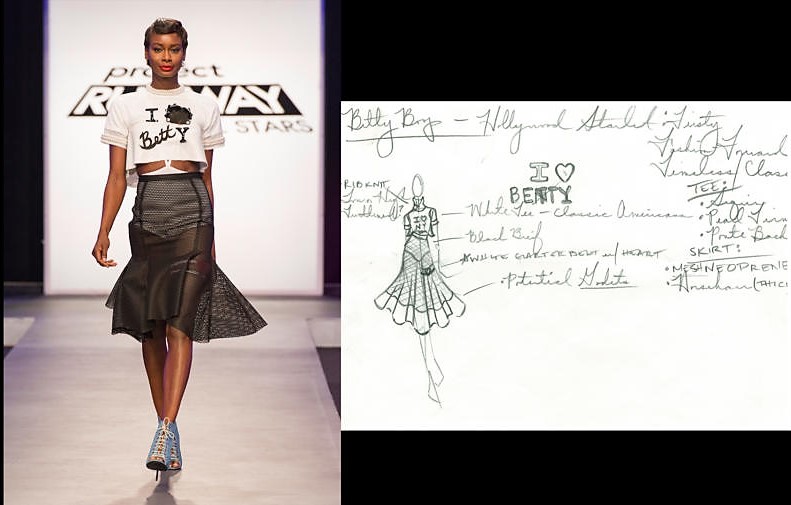 Joshua’s was my favorite! His whole concept was very fun: replacing I ❤ NY with I ❤ Betty using her head and the heart, having that black net as the skirt, without being too vulgar, everything was on point. The only negative critique was from Alyssa “when I think of chic I don’t necessarly see a crop top”, but I think that’s just a matter of taste. He was the rightful winner of the challenge!

Edmond’s challenge was a rollercoaster. He selected this beautiful fabric, half the way decided that it wasn’t working and uses it on reverse; then, Anne comes and tells him she loves the fabric; he got confused, and decided to make a new dress with the print on the front again. With all those changes, he ends up with a beautiful print in a badly made dress. It was unfortunatelly, because I think the print is amazing and his concept was also pretty good, girly with and edgy feel. 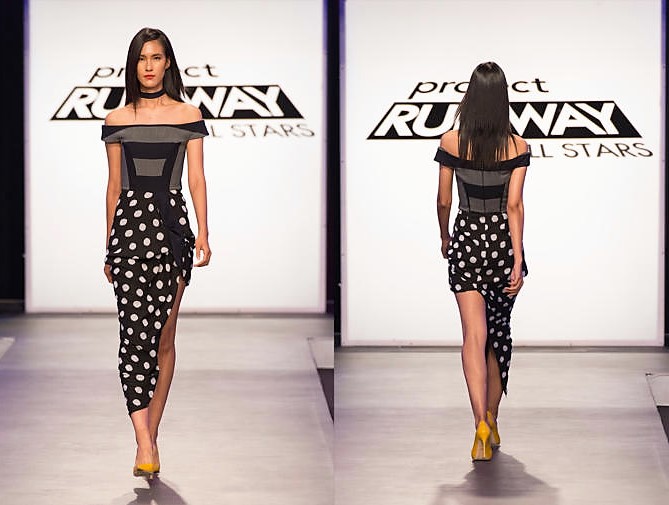 Anne didn’t liked Helen’s design on the mentoring moment, she thought that grey on the fabric made the look professional – which was the total opposite of Betty’s references (playful). Helen new that the polkadot was her chance to make this work and put it on the skirt was the best decision she could have made! I really like the outfit, it’s girl but strong and the fact that it has a dark palette makes it sophisticated. 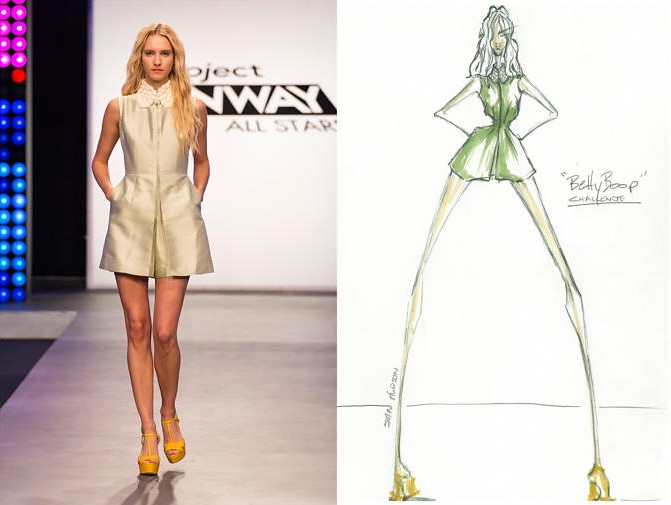 Isaac considered this look a smart look, because it feels american and classic. I think it is pretty – but not fantastic. For me Stanley should have been safe this week. But I love his sketches!

This was a total mess. The critique was almost hard to watch, because Char was trying very hard to justify her choice, but the judges were not letting her because despite her excuses, it was still a bad design. But, as Georgina pointed out, what the hell with the drapes for Betty Boop? At the end of the day, this was a fair elimination, Char’s look was definatelly the worst of them.

What did you think of this week’s looks?

Let me know in the comments!