Can you believe it has been 10 weeks of competition already? With only six contestants, it’s becoming harder to stay on top!

For today’s challenge we have my favorite – the unconventional materials challenge! The designers met with Tim Gunn and Brian Bolain – Lexus USA General Manager of Product and Consumer Marketing for the materials catch! With Safety as a priority of the brand, the contestants had to pick safety car gear – triangles, safety vests, net and so on. They would not have a trip to Mood and this is a one-day challenge.

Tim Gunn advised that they elevated the standards on the previous runway and they need to keep it up. Tim hasn’t used his safe card yet and there aren’t much more opportunities to do it. Everyone is hoping to match expectations and for Tim to not have the need to use the safe. 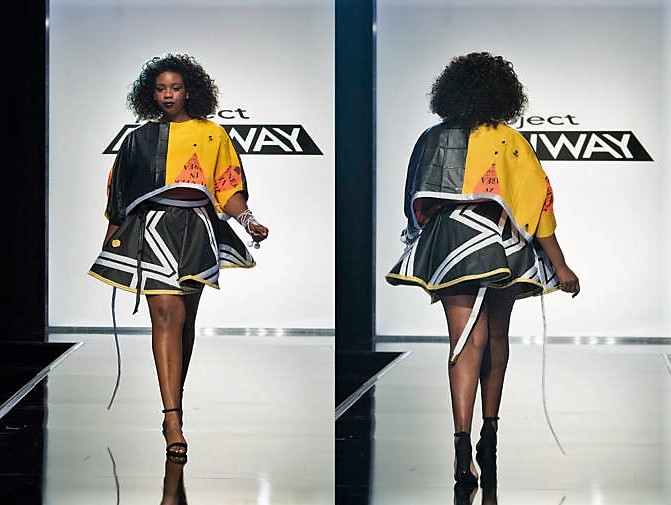 Brandon seems to be keeping up the good work! I was very pleased with the way it turned out! Yet, he had a silver version of the top he ended up not using because of sewing material difficulties, that I really liked despite Tim’s concerns about it. Heidi complemented him for his details atention and Carly was obsessed with the top!

I really liked Kentato’s look. I liked it better with a previous version of the top, before he cutted it to make the neck line this wider. I like the fringe, I like the coloured arrows, the length – the styling was horrendous. I totally agree with Carly, if the shoes was the simple nude sandals and the hair was in a ponytail it would be a totally different outfit. Nina was very disappointed with this look and hated the costume vibe of it – “this is not project tayloring” she concluded.

This was a miss for Michael. Personally, I think the problem was he began wrong with the blue rope – for this to not look “hookerish”, he would have to make it high neck of long skirt. When Tim told that the look would not combine and advised him to choose one piece and start creating from there – the rope or the blue bustier, I really thought we would choose the blue piece and make a new bottom. He decided to stick with his original idea. Then he started to had that black net on the bottom of the skirt and that thought “omg, if he makes it long this could turn out amazing!”, well, he didn’t. Everyone hated it, and Michael had to go home. Design wise, he deserved it, but I really got to like him over the weeks and I’m sad to seeing him go.

From the start of her design process I immediatelly thought “this is going to be over the top and it has to win”. I love everything about this outfit – the smashed reflectors as cristals on the top, the gigant long net skirt “on fire”, the safety helmet, everything! For me, this was real couture and I was very happy for Ayana.

Kenya freaked out when Tim said it was an unconventional materials challenge. She brought the most used material on this kind of challenge – I’ve seen amazing project runway looks out of seat belts – and decided to make a little black dress. Inittialy it had every ingredient to go wrong, but it didn’t (except the zipper that broke before they left the work room). Despite judges critques on the proportion of the bottom, everyone thought it was classy, chique and detailed – the painted effect, the belt and the texture. You can tell Kenya was very happy with the feedback, 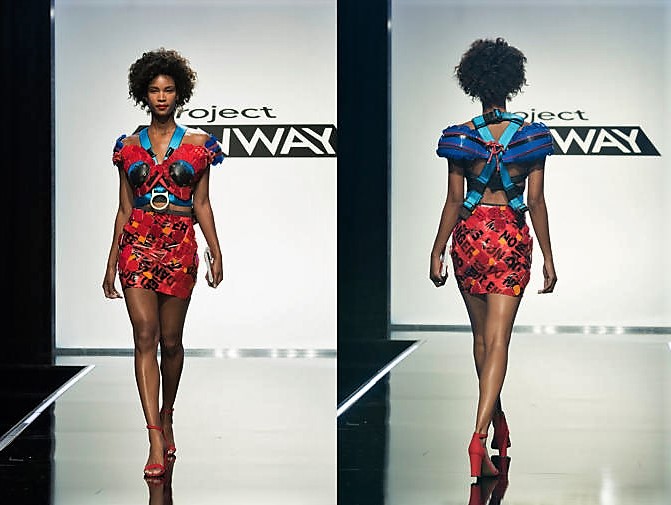 Last, but not least, Margarita! Kudos to her and to Ayana, for making such a complex outfit it only one day – it takes a lot of time management to achieve this kind of work! Both of them spent a lot of time handling the materials – cutting tape, smashing reflectors, sawing plastic helmets and so on. Margarita was really focused and working hard to have the best look – she kind of got intimidated by Ayana’s look (who wouldn’t be?), but I think she did just fine! Heidi and Nina were in love with that top (and it has a stupendous amount of work!) and Margarita was so creative with it, she also deserved to win.

What did you think of this challenge?